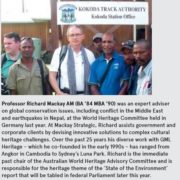 The Semester 1 2016 issue  of the Sydney Alumni Magazine, which is published by the University of Sydney for its graduate community, recently featured a brief article on Richard Mackay.

Noting Richard’s role as a cultural heritage adviser to the World Heritage Committee, the article also recorded his long term contribution as co-founder of GML Heritage and more-recent role at Mackay Strategic. The full article is available online here.

The World Heritage Committee suspended its 40th session, commenced in Istanbul in July 2016, following disruptions and concerns arising from an attempted military coup. The Session will now resume in Paris in October 2016.

Prior to the suspension the Committee had completed assessment of new nominations to the World Heritage List and consideration of ‘state of conservation’ reports for more than 50 properties, including every property that is currently included on the List of World Heritage in Danger.

21 new properties were inscribed on the World Heritage List, including the Archaeological Site of Philippi (Greece), Antequera Dolmens (Spain) and Ari (Turkey). A serial listing for the Architectural Work of Le Corbusier, spread across seven countries and Nan Madol – a ceremonial centre within the Federated States of Micronesia – were among the other inscriptions. 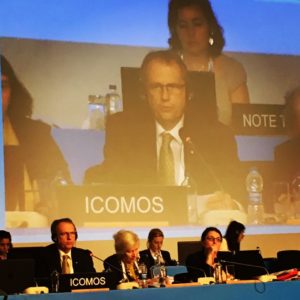 Richard Mackay provided advice to the Committee during the state of conservation considerations, including briefings and response to questions on the Historic Centre of Vienna, the Historic City of Quito, St Sophia’s Cathedral in Kiev, and threats to the Mercantile City of Liverpool.  World Heritage sites in Syria and Yemen continue to face major challenges, but until hostilities subside the focus must be on urgent first aid and repair of shattered residences and preparation for reconstruction. The Committee endorsed important advice from a Joint Reactive Monitoring Mission on the reconstruction and conservation of Kathmandu, but decided not to include Kathmandu on the List of World Heritage in Danger at this time. Commenting on the Committee Session, Richard observed that there is a strong commitment from State Parties to the Convention to ensure that there are appropriate measures for conserving and managing World Heritage places in a way which retains their Outstanding Universal Value:

“the Committee sessions are like an iceberg – what occurs on the podium and in the public forum is only the small tip of months of advisory work and liaison, plus behind-the-scenes bilateral meetings. At this Committee session, it was inspirational to be part of a process that is so important in caring for the jewels of humanity’s common heritage” he said.